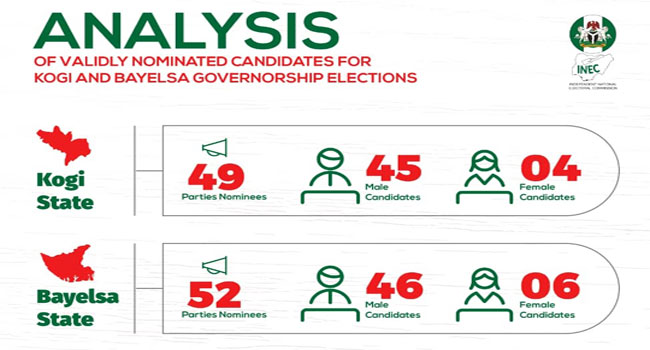 A total of 101 candidates have been nominated for the forthcoming governorship elections in Bayelsa and Kogi States.

The Independent National Electoral Commission (INEC) announced this in a statement by its National Commissioner and Chairman of Information and Voter Education Committee, Mr Festus Okoye.

Out of these, he said 52 parties for Bayelsa and 49 for Kogi submitted the list of candidates and their personal data at the close of nomination on Monday.

A breakdown of the 101 nominees for the two states shows that 91 are male while 10 are female – six in Bayelsa and four in Kogi.

According to Okoye, INEC will publish the personal particulars of the nominees on the notice boards of it offices in Yenagoa and Lokoja.

He added that the commission would make the names public on Friday, in line with the Electoral Act as well as the Timetable and Schedule of Activities for the governorship elections scheduled to hold on November 16 in the two states.

Read the statement below:

In accordance with the Electoral Act and in line with the Timetable and Schedule of Activities for the Bayelsa State and Kogi State Governorship elections, the Commission will on Friday 13th September 2019 publish the personal particulars of nominated candidates for the elections.

The personal particulars of the nominees will be published on the notice boards of our offices in Yenagoa and Lokoja.

As required by law, the Commission monitored the primaries of the political parties and the list of aspirants who emerged has since been published on our website and other platforms.

From our records, 64 political parties conducted primaries in Bayelsa State as against 59 in Kogi State.

Out of these, 52 political parties for Bayelsa State and 49 for Kogi state respectively submitted the list of candidates and their personal particulars at the close of nomination at 6pm on Monday 9th September 2019.

While some of the political parties that conducted primaries did not submit any list and personal particulars of candidates, a few failed to submit within the time limit prescribed by the Commission.

Of the 52 nominees for Bayelsa State, 6 are female, while 46 are male. The corresponding figures for Kogi State are 4 female and 45 male nominees.

The publication of the personal particulars of nominees is for members of the public to make any claims and objections regarding these candidates, as required by law.

Similarly, the Commission has observed from a preliminary review of the list and personal particulars submitted by the political parties that some of the Governorship and Deputy-Governorship candidates are below the minimum age prescribed by the Constitution for these positions.

The Commission will notify the concerned parties soon and subsequently consider further action.

As we continue to prepare for the Bayelsa and Kogi Governorship elections scheduled for Saturday 16th November 2019, the Commission once more reminds the political parties of the timelines in the Timetable and Schedule of Activities and requests strict compliance with them.

We look forward to working with the parties and all stakeholders to make the forthcoming elections in the two States free, fair and credible.