Nigeria will begin their quest at the 2021 Africa Cup of Nations (AFCON) on Tuesday when they face Egypt in a Group D match in Garoua.

The Super Eagles, aiming for their fourth African title having last won it in 2013 in South Africa, will rekindle a rivalry dating back to the 60s against Egypt at the Estadio Roumde Adjia in the group’s opening game.

While Nigeria look to add another trophy to their cabinet, Egypt are record AFCON winners having emerged champions on seven occasions.

Less than two months before the tournament, Nigeria sacked their long-time manager, Gernot Rohr, and appointed former international, Austine Eguaveon, to take charge of the team on an interim basis.

Aside from that, the side headed to the tournament missing star striker, Victor Osimhen. The Napoli forward was ruled out of the competition for health reasons, raising concerns about the team’s attacking options.

Watford’s Emmanuel Dennis was also left out after his club stopped him from going to the competition. The Nigeria Football Federation (NFF) had accused Watford of “baring fangs” over the player’s absence. Defenders Leon Balogun and Shehu Abdullahi were also excused from the soccer party.

Heading into the competition, the game against Egypt, the Nigerian coach admitted that while he respects them, his side is in for business.

“We respect Egypt, but Nigeria is a great team, and we didn’t come here to lose,” Eguaveon said.

“I’m not looking for personal glory, but the most important thing I’m looking for is an achievement for Nigeria.”

The team’s skipper, Musa, is also confident that Nigeria can emerge winners in the end.

“We have a good team, and we are going to compete for the title with whatever it takes,” the former Leicester City star said ahead of the Egypt clash.

While the absence of Osimhen – the nation’s top scorer in the qualification race for the competition – is a major blow for the Nigerian side, the Super Eagles can bank on the services of Union Berlin’s Taiwo Awoniyi, Leicester City’s Wilfred Ndidi, and Villareal’s youngster, Samuel Chukwueze, to do the damage.

Ndidi has been a mainstay for the Foxes in the English Premier League while Awoniyi is expected to replicate his form with the German side for Nigeria. 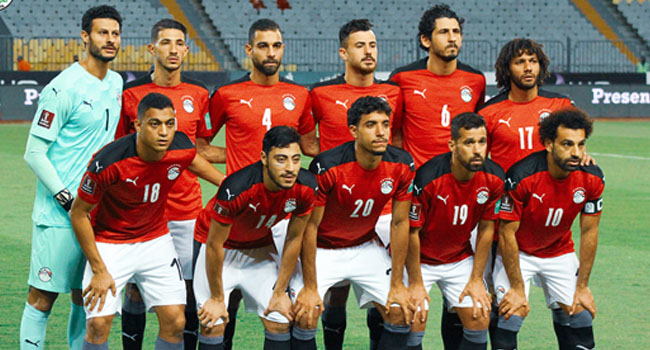 Egypt are making their 23rd appearance at the AFCON. In 2010, the Pharaohs won their third AFCON trophy in a row.

They have also secured a place in the playoff stage of the World Cup qualifiers. They got four wins and two draws from six Group F games.

Coach Carlos Queiroz believes his boys have what it takes to win the competition in the Central African nation.

“We will face a team that has many great players, but we are ready and we will face them with full force,” he said.

Captain, Mohamed Salah, while re-echoing the coach’s comment, said he looks forward to winning the trophy.

“I have never won a title with the national team and I hope this will be the first. We have a great coach and a great team so we will give our all,” he added.

Liverpool’s Salah is arguably the man to watch out for when the Nigerian team battles Egypt. The forward is the leading scorer in the English Premier League with 16 goals.

Having lost to South Africa in the round of 16 in the last continental tournament, Queiroz’s men will be relying on the former Chelsea man to set the tone for the team in their search for an eighth crown.

Mohamed Elneny of Arsenal is also another man to watch out for against the Super Eagles.

Nigeria have only lost one of the last five games. They have won three and drawn one – the defeat against the Central African Republic (CAR) during a 2022 World Cup qualifier.

On the other hand, their opponents have lost two, drawn one, and won two games.

In the last five encounters between the sides, Nigeria have won twice just as Egypt have defeated the Super Eagles twice. The other game ended in a draw.

Both teams last met at the AFCON in Angola 2010 with the North Africans beating Nigeria 3-1 en route to winning their seventh African crown.