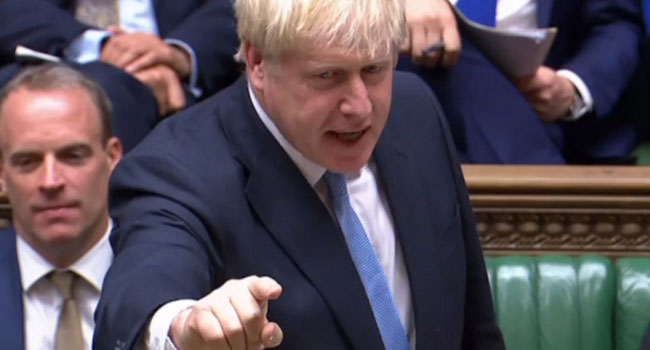 The British pound hit multi-year lows against the dollar on Tuesday amid fears of a no-deal Brexit but rebounded after Prime Minister Boris Johnson lost his working parliamentary majority ahead of a crucial Brexit vote.

“For all the uncertainty that lies ahead, markets see a Boris Johnson led no-deal Brexit as the worst-case scenario and thus treat anything that undermines that as pound positive,” said Joshua Mahony at IG.

Sterling struck $1.1959 in early European business, its worst trading level since 1985 with the exception of a 2016 “flash crash” which took it even lower for a very short moment.

But then a Conservative lawmaker joined the opposition ahead of a showdown with rebel MPs over Brexit that could lead to a snap election within weeks.

“Though there is no doubt plenty of pain on the horizon, sterling managed to shake off the excesses of its Tuesday’s slide as the session went on,” said Connor Campbell at Spreadex.

The UK leader insists that Britain will leave the EU with or without a deal on October 31.

Markets fear that a no-deal Brexit could be disastrous for the British economy, at least in the short term, and could plunge the country into recession.

While the pound’s weakness makes imports into Britain more expensive, for example oil which is traded in dollars, it cheapens exports.

However, a general election could see the main opposition Labour party win power, led by Jeremy Corbyn whose policies are widely regarded as being unfriendly towards business.

Analysts acknowledged they could not see much upside for sterling in any likely scenario.

“It seems there is no good near-term outcome. We either have an increased risk of no-deal, the possibility of a Corbyn government or more uncertainty,” Craig Erlam, senior market analyst at Oanda trading group, told AFP on Tuesday.

“It would appear traders don’t view any of these options as being particularly favourable for the pound,” Erlam added.

In commodities trading, oil prices extended losses on concerns about data showing a lift in output from OPEC and Russia, despite a pledge from them to reduce production.