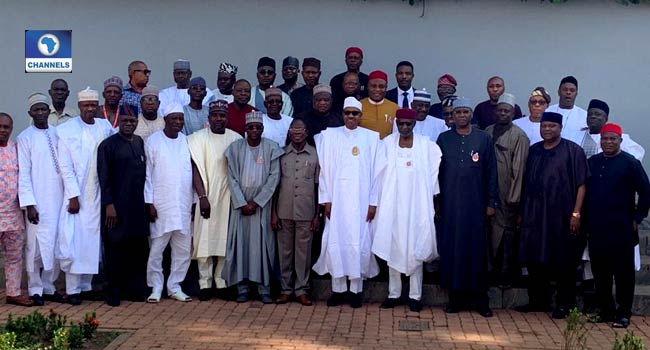 President Muhammadu Buhari on Friday held a meeting with All Progressives Congress (APC) state’s chairmen at the State House, Abuja.

APC Chairmen from all the 36 states of the Federation were at the meeting.

Others at the meeting include the APC National Chairman, Adams Oshiomole, the Chief Of Staff to the President Abba Kyari and the Secretary to the Government of the Federation Boss Mustapha.

At the end of the meeting which was held behind closed-doors, the state chairmen declined comments and refuse to speak with journalists.

President Buhari’s meeting with the state’s chairmen comes a day after he met with APC governors at the presidential villa in Abuja.

The agenda of the meeting was not disclosed.

However, the National Chairman of the party Adams Oshiomole and the Vice President Yemi Osinbajo were at the meeting.

Governors who are present include those of Nasarawa, Lagos, Osun, Edo, Ekiti, Jigawa, Kaduna, Niger, Gombe among others. Some other governors are represented by their deputies.