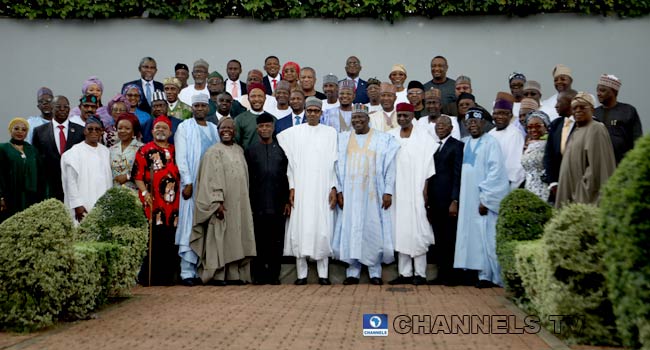 President Muhammadu Buhari on Wednesday swore in 43 ministers into his cabinet and assigned their respective portfolios. Popular economist, Tilewa Adebajo in reaction says the cabinet is ‘heavily political.’

In an interview on Channels Television, Adebajo, who is also the CEO of CFG Advisory said the government needs to run with a clearly defined economic goal to revive the nation’s economy.

READ ALSO: I Do Not Feel Impact Of Returning Ministers, Says Bode George

“This is a heavily political cabinet with ex-governors and ex-senators dominating. What is more important now is for the government to put together a clearly defined policy that will stimulate growth in the Nigerian economy,” he said.

Adebajo also stressed that economic indicators are negative and the nation’s economy might be heading for recession is the Federal Government does not go back to the drawing board.

“With the way Nigeria’s economy is going if caution is not taken, as the CBN has said we will be heading for a recession.

“The key economic indicators are not very positive. Right now, we are about over $70billion in debt. We are using 65% of our revenues to service debts, clearly, this is not sustainable.

“It is important that the government take a look at its economic recovery growth plan.”

The need to revamp the Buhari’s administration’s economic plan is vital. Adebajo added that there is a need for the government to tell Nigerians their plan on how the economy will be handled.

He said, “What we need is a plan that can grow the economy.”