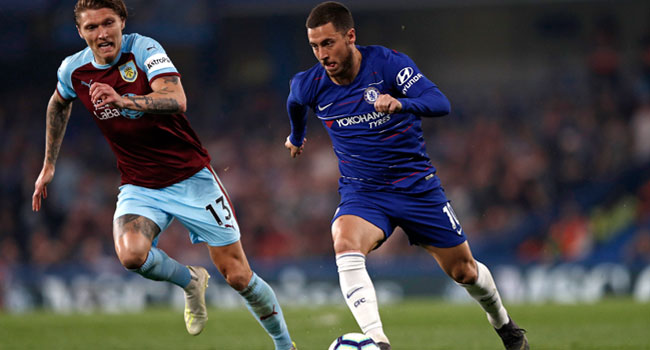 Chelsea moved up to fourth in the Premier League after a chaotic 2-2 draw against Burnley, but the sloppy display did little to enhance their hopes of qualifying for the Champions League.

In a frantic opening 24 minutes at Stamford Bridge, Gonzalo Higuain put Chelsea ahead, only for Burnley’s Ashley Barnes to punish more dismal defending from the Blues.

Without a win in their last two league games, Chelsea will take only slender comfort from climbing one point above fifth-placed Arsenal to sit level on points with third-placed Tottenham.

Chelsea would have gone third with a victory, but instead, they have now played a game more than top-four rivals Tottenham, Arsenal and Manchester United, who are three points behind in sixth.

It was a missed opportunity after defeats for Tottenham, Arsenal and United at the weekend and Chelsea were booed off at full-time.

In a fitting coda to a damaging evening, Sarri was sent to the stands for protesting in the final seconds before several members of the Blues bench were involved in a tetchy touchline clash with their Burnley counterparts.

Now Arsenal can replace Chelsea in fourth if they avoid defeat at Wolves on Wednesday.

Adding to Sarri’s problems, he was hit by first-half injuries to France midfielder Kante and England winger Callum Hudson-Odoi.

Chelsea are fighting to avoid missing out on Champions League qualification for a second consecutive season, which hasn’t happened since Roman Abramovich bought the club in 2003.

Even an influential display from Eden Hazard couldn’t aid their cause against tenacious Burnley.

Hazard was named on the PFA Player of the Year shortlist on Saturday and the Belgian, fit to start after suffering an Achilles knock against Slavia, led the Chelsea assault.

His stinging drive forced an unconvincing save from Burnley keeper Tom Heaton before his sublime chipped pass set up Higuain for a lob that Ben Mee acrobatically hooked off the line.

Despite that fast start, Chelsea were stunned in the eighth minute when Hendrick’s rocket put Burnley ahead.

It was a poor goal for Chelsea to concede as Cesar Azpilicueta could only head a Burnley corner to the edge of the area, where Hendrick was left unmarked to volley a superb dipping strike past Kepa Arrizabalaga.

Hazard’s majestic assist helped Chelsea draw level four minutes later, underlining why the club are so keen to keep their talisman out of Real Madrid’s clutches.

Cutting in from the left, Hazard twisted and turned so rapidly that Burnley defender Matt Lowton fell flat on his backside as the Belgian picked out Kante for a powerful shot that flashed past Heaton from 10 yards out.

The Chelsea defender executed a deft back-heel to Higuain, who continued his run and crashed a brilliant finish into the roof of the net from an acute angle.

It was only Higuain’s fourth goal of a disappointing loan spell from Juventus after Sarri again picked his old Napoli player instead of Olivier Giroud, who has complained he wants to play more if he is to remain at Chelsea.

Sarri’s problems lay at the back rather than up front on this occasion and Burnley punished more poor defending to equalise in the 24th minute.

With Chelsea slow to react to a Burnley free-kick, Mee’s header was glanced on by Chris Wood and the unmarked Barnes apply the finishing touch with a close-range volley.

Hazard was tormenting Burnley and another incisive raid ended with Azpilicueta forcing Heaton to save at his near post.

But Chelsea ran out of steam and when Giroud replaced Higuain, the angry Argentine threw a training top and shouted in frustration.