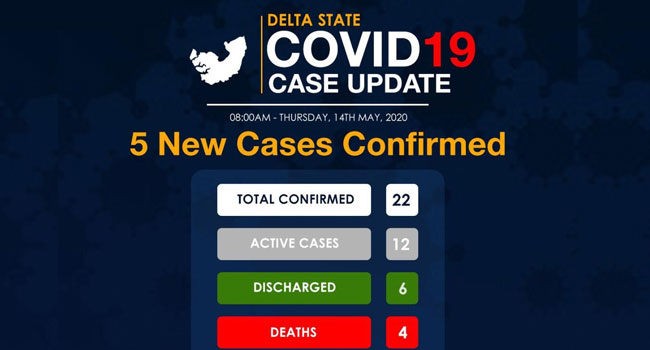 One of the five new cases of coronavirus (COVID-19) reported in Delta State is dead.

The death involved a patient who was reported to have been infected in Oshimili North Local Government Area of the state.

The State Ministry of Information confirmed that the patient died on Wednesday night after the result of his sample collected tested positive for coronavirus.

Delta now has a total of 22 infections with six people discharged and four deaths.

The Nigeria Centre for Disease Control (NCDC) had reported five new cases in Delta – in Warri South and Oshimili North LGAs of the state.

These were among the 184 new cases reported across 21 states and the Federal Capital Territory (FCT).

In a late-night tweet on Wednesday, the NCDC said the country now has 4,971 COVID-19 cases and 164 deaths while 1,070 patients have been discharged.