The Super Eagles will be gunning for their fourth continental trophy when the African Cup of Nations (AFCON) begins on January 9th.

Nigeria, slated for their 19th appearance in the competition, will play in Group D of the tournament billed for Cameroon this month

In spite of the shakeup that involved the sack of long-time manager, Gernot Rohr, and the appointment of Austine Eguavoen in his stead [on an interim basis] for the tournament, and a surprising naming of Portuguese tactician, Jose Peseiro as a replacement- pundits and fans alike, see the 1994 champions as one of the favourites for the trophy.

‘Winning Is The Goal’: Simon Moses Aiming For AFCON Glory With Nigeria

Ahead of the competition, Channels Television takes a look at Nigeria’s Group D opponents, providing an overview of their history in the tournament (and major successes), their strengths, and key men among others.

Sudan hosted the first-ever AFCON in 1957  – which was won by Egypt – and finished third. They went a step better as they came second both at the 1959 and 1963 editions

Seven years later in 1970, the Falcons of Jediane emerged champions of the continent on home soil.

But a lull saw them miss the competition for 32 years, only to qualify in 2008 as Ghana hosted Africa.

In 2012, they reached the quarter-finals of the AFCON, signalling one of the best performances in the competition in recent times.

Hubert Velud’s men, who qualified for the competition after earning 12 points from their qualifying group, also beat South African en route making it to the finals. The Desert Hawks were second in Group C and scored nine goals.

In Ramadan Agab, Nasr Eldin El Shigail, and Mohamed Abdel Rahman  – who scored thrice during qualification – the Falcons of Jediane will be looking to cause a major upset in Cameroon.

The Djurtus and Nigeria have never met at the international level. In Cameroon, the Super Eagles will play them at Roumde Adjia Stadium on January 19. It is the last group game for the West African teams.

Despite a winless run in Africa’s premier competition, Guinea-Bissau coach, Baciro Candé, is confident his team will pull up a surprise against continental heavyweights, Nigeria and Egypt.

“I think that, by the time of the competition, Guin­ea-Bissau will be prepared to face its opponents,” he told local media after the draws in late August.

“As al­ways in football, there are accessible teams, there are also surprises and we will work to make a good CAN for us by being a surprising team.”

Jorginho and Piqueti Silva, top scorers during the qualification race with two goals each, are expected to carry the West Africans past the group stage of the competition for the first time.

When they hosted the 2019 AFCON, critics had tipped The Pharaohs to win the prize. But a round of 16 defeat to South Africa, left the home fans dejected.

Having beaten Nigeria eight times in 18 meetings, Salah, and his teammates will be aiming to stretch their dominance over the 2013 African champions.

In their most recent clash in the competition, the North Africans swept to a 3-1 win in Angola as they sealed their seventh AFCON.

But the Super Eagles billed to clash with Egypt in the Group D opener on January 11, won the last meeting between both sides in 2019.

Having looked at Nigeria’s opponents for the 2021 AFCON, here is a list of the team’s fixtures, the date and time they will be played: 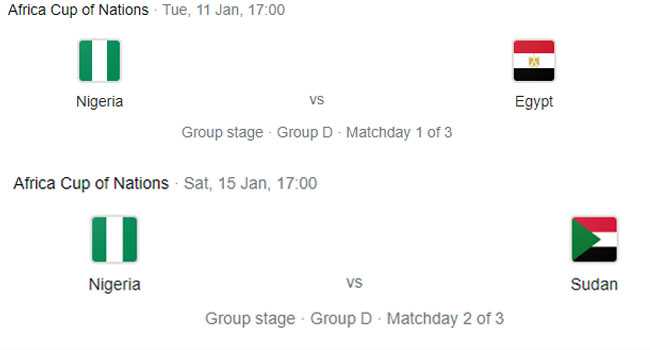 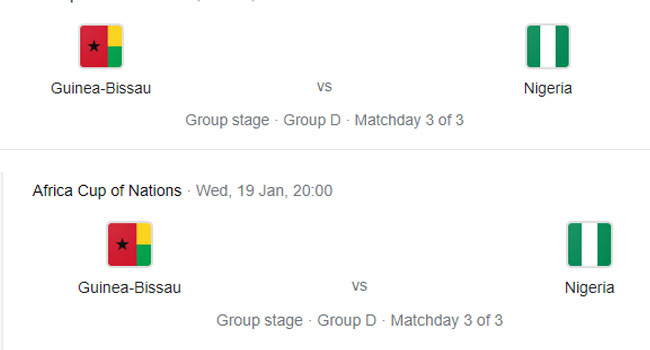