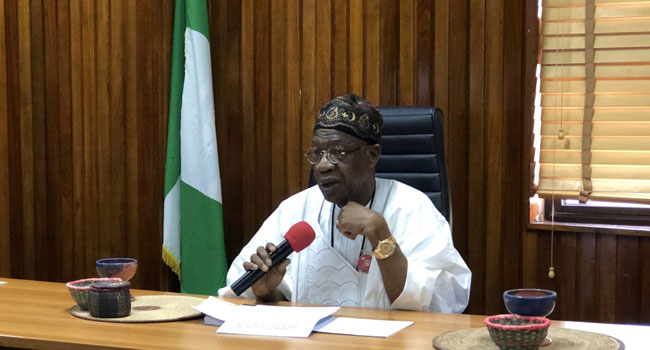 The Federal Government has revealed that over 50 percent of filling stations located along the Magama Jibia/Niger border owned by foreigners are set up solely for the purpose of smuggling petroleum products.

The Minister of Information and Culture, Lai Mohammed disclosed this after he led a powerful delegation on an assessment tour to inspect the activities of the joint border patrol at sector 4 of the border drill in Katsina state.

Mr Mohammed added that since the closure of the filling station, the smuggling of petroleum products out of Nigeria has greatly been reduced.

“There are hundreds of filling stations along the border; we counted many as we drove to the border this morning. They were set up purposely for smuggling.

“They don’t sell the fuel consignment they receive to the public, 50 percent of them are owned by foreigners.

“Now that they are closed, we have recorded over 30% in domestic fuel consumption,” he maintained.

He explained that the four sectors where the drill is currently ongoing have recorded highest successes in terms of illegal migration, cattle rustling, kidnapping, banditry, and arms smuggling.

“We have recorded over 30 percent increase in revenue since the drill.

“Gentlemen, before the drill, the borders contributed nothing to the revenue, nothing.

“Customs was recording about N4.5 billion daily, but since the closure, the figure has increased to between N5 and N8 billion daily.

“The North-West sector, of the four sectors affected by the drill, has recorded the highest success in terms of reduction of illegal migration, thanks to the drill.”

The minister also added that the exercise is not targeted at any region in the country, neither is it designed to cripple businesses in any part of the country.

He maintained that since the exercise commenced over a few months ago, local businesses across the country have continued to thrive, as farmers and rice millers, in particular, are now having huge turnover.

Mr Mohammed added that Nigeria will continue to engage with neighbouring countries to ensure that all the concerns that led to exercise swift response are fully addressed.