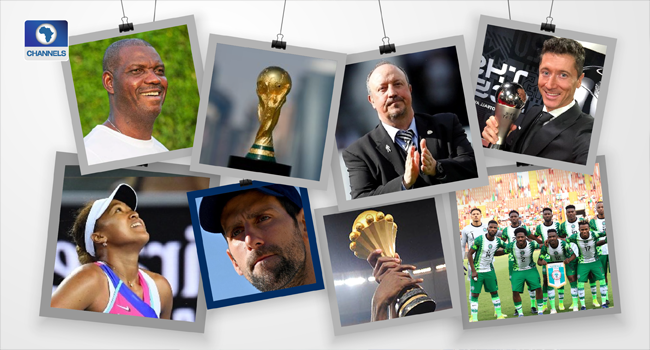 The draw for the 2022 World Cup playoffs for Africa will hold on Saturday (today) with the Super Eagles possibly facing Egypt, Cameroon, and Ghana. Earlier in the week, Nigeria were also paired with Tunisia in the Africa Cup of Nations (AFCON) round of 16.

These and more are part of stories that make First Eleven this week!

W/Cup Qualifiers:  Who Will Nigeria Play?

Nigeria will know their opponents in the playoff for the 2022 World Cup qualifiers. The Super Eagles had a tumultuous journey en route to this stage. They lost at home to the lowly-ranked Central African Republic in one of their games and survived Cape Verde in their last match to make the final lap of qualification for the competition.

The team, which is already without long-time manager, Gernot Rohr, after the uninspiring showings, are in Pot 1 for the draws billed for Saturday in Cameroon.

Africa’s football ruling body had ranked the teams based on the November 19 FIFA ranking which will see the three-time continental champions avoid some of the heavyweights.

Nigeria is in Pot 1 alongside Algeria, Ivory Coast, Morocco, Tunisia, and Senegal. This means the Super Eagles won’t be meeting any of these sides. Their opponents, will, however, come from Pot 2 which includes Cameroon, Ghana, Mali, and DR Congo.

The playoffs will take place in March with the first leg set to be played at the home of the lower-ranked sides.

Apart from the draws for the playoffs, pairings for the third round of 2023 Africa Cup of Nations (AFCON) qualifiers will also be held in the Cameroonian city of Douala. The competition is billed for the Ivory Coast next summer.

Saturday’s draws will be coming days after the pairings for the 2021 Africa Cup of Nations (AFCON) were confirmed. High-flying Super Eagles – who won all group stage games – are up against 2004 winners, Tunisia.

Nigeria, seeking a fourth AFCON title, face the Carthage Eagles in Garoua on Sunday. The time for the game is 8:00 pm (WAT).

In another mouth-watering round of 16 clash, Ivory Coast – who sent defending champions, Algeria, packing from the tournament –  take on Egypt.  The full fixtures are here.

While the Super Eagles have everything going for them at the AFCON, that is not the fate of the Nigeria Football Federation (NFF) which is in dilemma over the team’s coach, Austine Eguaveon.

The former international was appointed on an interim basis following Rohr’s dismissal. He had one thing to do: take the boys to the AFCON. Weeks after his new role, the federation named Portuguese, Jose Paseiro, as the substantive manager of the 2013 champions. Paseiro was expected to take over at the end of the competition and lead Nigeria to the 2022 World Cup qualifiers.

But that might not be the case as calls to retain the 1994 AFCON winner gathered momentum. Eguaveon has won the hearts of millions of Nigerian fans following Nigeria’s stellar showing in Cameroon.

The president of the NFF, Amaju Pinnick, admitted that Eguaveon might be retained if he wins the competition as against the earlier announcement. Calls for indigenous coaches to handle the team have also heightened in recent weeks.

Away from Nigeria, tickets for the next World Cup have gone on sale at discounted prices. While authorities are yet to confirm if fans will be allowed to attend the games as concerns over COVID-19 persists, migrant workers can attend the matches for just $11.

FIFA opened a draw that gives individuals match tickets for as little as $69 for international fans. This is about one-third lower than in Russia 2018. But a ticket for the final could cost up to $1,607.

And in what seems like a consolation for missing out on the Ballon d’Or, Roberto Lewandowski, won the FIFA Men’s Player of the Year.

Egypt and Liverpool striker, Mohamed Salah, was also in contention for the award. Lewandowski was not the only winner on the day. Manchester United forward, Cristiano Ronaldo, also claimed the FIFA Special Award. Chelsea and Senegal goalkeeper, Edouard Mendy, picked up the goalkeeping prize.

Moving on to tennis! Serbian star, Novak Djokovic’s Australian Open vaccination row ended in deportation. Djokovic was deported by the Australian government on Sunday after a protracted dispute over his vaccination status.

The Australian government said it took the decision so as not to encourage vaccine hesitancy. It also insisted that the country’s laws must stand irrespective.

Djokovic’s deportation also triggered reactions from across the globe. Fans back home hailed the tennis star’s insistence, with the family saying, like the player, that they were disappointed.

In spite of the drama, the Australian Open continued seamlessly. Naomi Osaka’s defeat is one of the shocking losses recorded so far in the championship.

The Japanese player lost to unseeded American, Amanda Anisimova, in the third round of the competition on Friday morning.  The former world number one had won the first set on Margaret Court Arena but did not close out the match with Anisimova winning 4-6, 6-3, 7-6 (10/5). Friday’s victory sets Anisimova with Ashleigh Barty.

Before Osaka’s ouster, there was also another dismissal. This time, it was former Liverpool manager, Rafa Benitez, who got the hammer.

The Spaniard was sacked as Everton manager, about 200 days after he took over the job. Benitez paid dearly for a series of poor results that saw Everton lose nines of their last 13 games.

“Benitez, who joined Everton in June 2021, has left the club with immediate effect,” the club added.

Manchester United legend, Wayne Rooney – who currently manages Championship side, Derby – is favoured to take over the job!

The former Liverpool manager’s dismissal came in a week where a court in Italy upheld Brazil’s Robinho’s nine-year sentence for the gang rape of a young woman.

The former AC Millan player’s lawyer, Jacopo Gnocchi, said that judges “deemed that the appeal filed by the player was inadmissible and that therefore the sentence is final”.

Judges at the Court of Cassation in Rome said the sentence dates back to January 2013.

Jacopo Gnocchi said that judges “deemed that the appeal filed by the player was inadmissible and that therefore the sentence is final”.

The 37-year-old did not attend any of the hearings relating to the case. He was among a group of six men accused of taking part in the rape of an Albanian woman celebrating her 23rd birthday in a Milan nightclub.

“A total of 15 Italian magistrates consider the accusations to have been widely proven. Our wish is that Brazil carries out the sentence,” Gnocchi noted.

In 2017, the Brazilian had the conviction and sentence confirmed for a second time. This followed his loss at the Milan Court of Appeal in December 2020.