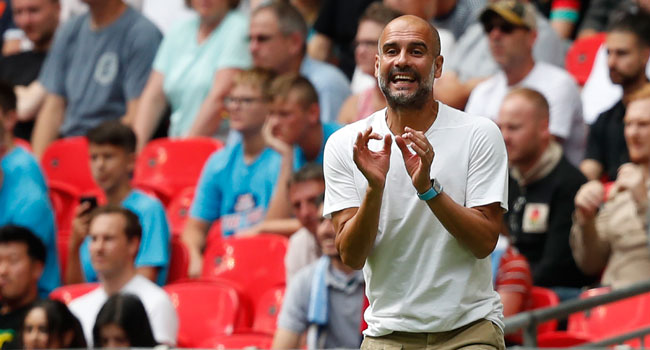 Pep Guardiola has backed Riyad Mahrez to be a key man for Manchester City after the Algeria winger’s vibrant start to the season.

With Leroy Sane out for at least five months as he recovers from an anterior cruciate ligament injury, Mahrez will have plenty of chances to make his mark this season.

He did that on Wednesday in the Champions League, scoring one and creating another as City strolled to a 3-0 win at Shakhtar Donetsk.

The Algerian struggled at City last season following his £60 million move from Leicester.

But now Guardiola believes the 28-year-old can become a major part of his plans as he adapts to City’s unique style.

“He took a bit of time to adapt as it was different from Leicester where he was used to playing on the counter attack, but that is normal.

“But he loves to play football and he loves training. He just wants to be in the contact with the ball. I like that.

“He doesn’t feel too much pressure and he has a lot of confidence in himself.

“If he has a bad action, he wants the ball back to try again. That is the best detail for players in big clubs.

“He is quality, but the only thing is he just needs to be more relaxed when he does not play.”

While Mahrez was impressing in Kharkiv, Gabriel Jesus also caught the eye with a goal in just his second start of the season.

The Brazilian striker has had to play second fiddle to Sergio Aguero since he came to England in January 2017, but Guardiola says he is the perfect understudy to the Argentine.

– Incredible future –
“It’s difficult to find a striker like Gabriel in Europe or the world. He is a top player and his behaviour in training sessions is outstanding,” Guardiola said.

“He has to handle being behind Aguero, a legend in this club and one of the best strikers I have ever worked with, so my praise for Gabriel is over the moon.

“He needs to be patient but when he plays, he does absolutely everything in the way he fights and the way he tries. He is a young forward and his future is incredible.”

Fernandinho appears certain to retain his place for the Premier League game at home to Watford on Saturday as an emergency centre-half, having stepped in alongside Nicolas Otamendi to replace the injured John Stones in Ukraine on Wednesday.

Stones faces another month out and Aymeric Laporte is sidelined until the new year, so Brazilian midfielder Fernandinho will be needed in defence for the foreseeable future.

With Vincent Kompany joining Anderlecht in the close-season, it leaves teenagers Eric Garcia and Taylor Harwood-Bellis as the only other alternatives to Fernandinho as a centre-half.

However, Guardiola is trying to turn the difficult situation into a positive.

“We don’t have many options. But I don’t see it as a problem, it’s a challenge,” he said.

“We have to accept it and handle it. You have to be positive. If we do that, we’ll be happy.”