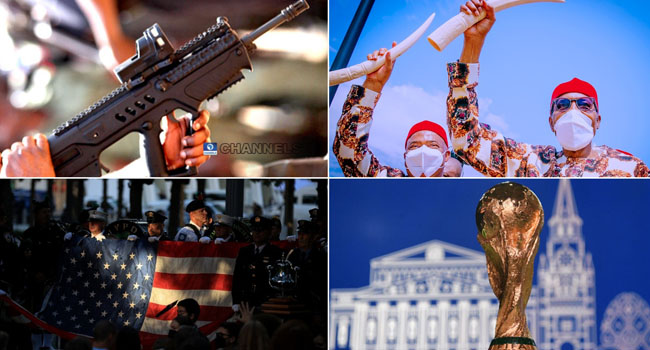 With 9/11 as a major global focus for the week, an extra light has been beamed on insurgency, security and the war against terror.

We have put together some quotes that drive home the message of what pressures the world is facing at this time and how Nigeria has fared in the course of the passing week.

These quotes also help paint a picture of some things to expect within the coming week, even as the world continues to battle COVID and seek efficient methods to restore the earth’s fragile peace.

1. “If there are no roads; if there is no security, what can the people do?”

President Buhari in Imo state speaks about the pertinence of providing infrastructure and creating a secure environment for the masses.

2. “The external reasons we cite as reasons for our problems cannot thrive without severe internal weaknesses in our society. The chief weakness is a human one – our elite, our political, economic, and religious elite”.

3. “Essentially, it’s about the fact that men and women are equal, in the sense of participation in society and in life in general. And in that sense I can say, ‘yes, I’m a feminist’.”

German Chancellor Angela Merkel describes herself as a feminist, saying her position on equality between men and women had developed over the years.

4. “To me, that’s the central lesson of September 11th. It’s that at our most vulnerable, in the push and pull of all that makes us human, in the battle for the soul of America, unity is our greatest strength.”

President Biden speaks as America marks the 20th anniversary of 9/11 with solemn ceremonies given added poignancy by the recent withdrawal of troops from Afghanistan and return to power of the Taliban.

Envoys from the West Africa bloc ECOWAS say deposed Guinean President Alpha Conde is in good health, following the coup which set the nation on the edge.

6. “People were laughing that I lost my polling unit, but you know, it is democracy that won.”

Governor Nasir El-Rufai of Kaduna State reacts to the conduct of local government elections in the North-West state, describing it as a victory for democracy.

7. “The north has always been behind in education, we’ve continuously been the disadvantaged region right from independence even though we’re given preferences, JAMB scores, and all that. That has not helped; in fact, it has made our people lazy.”

Governor Nasir El-Rufai says lowering cut-off marks for northern students by the Joint Admissions and Matriculation Board (JAMB) will not make them as competitive as they ought to be.

8. “NARD goes about telling Nigerians that government is owing them salaries and that government is not taking the problems in the health sector serious. But this is not true. It is incorrect. No doctor, nurse, pharmacist or any other health worker including the driver is owed monthly salary. Government pays as and when due.”

The Minister of Labour and Employment, Chris Ngige, says contrary to what he described as propaganda by the striking members of the National Association of Resident Doctors (NARD), no doctor or health worker in Nigeria is owed their monthly salary.

9. “Why do we need to allow Fulani from all these countries to come and destroy our land? That is the point we are saying. They have given unnecessary stress and risks to our security agencies in Nigeria.”

Governor Samuel Ortom speaks about the degeneration of security breaches in Benue State.

10. “Yes, we’ve had serious security challenges. They were inherited by the Buhari administration, and they mutated and became hydra-headed. But a government exists to solve problems, and that is what President Buhari had been committed to doing.”

Special Adviser to the President on Media and Publicity, Femi Adesina assures Nigerians that the insecurity ravaging the country will soon be a thing of the past.

11. ‘‘Nobody can accuse me of having companies or mansions anywhere in the country and I thank God that I try to keep myself as clean as possible so that I cannot be taken, hostage.”

President Muhammadu Buhari says he cannot be accused of having companies or mansions across the country, adding that he tries to keep himself clean so that he won’t be taken hostage by anyone.

12. “Our commitment to the unity and peace of Nigeria is irrevocable.”

Imo State Governor, Hope Uzodinma, says his administration and the people of the state are committed to the peace of Nigeria.

13. “Could we, for example, work out an understanding with the UN, AU, Commonwealth and possibly, even the development finance institutions we are a part of to act in unity to suspend a country where there has been a seizure of power from all these bodies simultaneously?”

14. “Part of the crises in this country today is because of impunity.”

Rivers State Governor, Nyesom Wike, identifies impunity as one of the major factors responsible for the security challenges in the country.

15. “A World Cup every two years could distort the most important football competition on the planet, lowering its quality and undermining its exclusive character and its current demanding standards.”

South American football’s governing body CONMEBOL hits out at FIFA proposals to stage the World Cup every two years, saying there was “no sporting justification” for shortening the window between tournaments.

16. “We wish to reiterate that the bank has not contemplated, and will never contemplate, any such line of action. The speculation is a completely false narrative aimed at triggering panic in the foreign exchange market.”

The Central Bank of Nigeria (CBN) urges Nigerians to ignore reports that domiciliary account operators have been directed to convert their holdings into naira.

17. “What we are doing to bandits is to send them to God, so they can answer their questions.”

Zamfara State Governor, Bello Matawalle, says his administration will no longer grant amnesty to bandits in the state.

18. “Invisible voice says ‘sit at home?’ And, you just comply and lose money. You don’t know who says sit-at-home, you just lose money.”

Anambra State Governor Willie Obiano orders markets, banks, transport business owners, among others to ignore the sit-at-home order and go about their businesses from Monday, September 13.

19. “We must therefore show commitment to peace in words, action and other necessary means.”

President Muhammadu Buhari urges health workers, including members of the National Association of Resident Doctors (NARD) to return to their duty posts.

21. ‘‘I will do my best to ensure that Nigerians that try hard, succeed in their efforts.’’

Buhari vows to do all in his power to see that hardworking Nigerians succeed in their various endeavours.