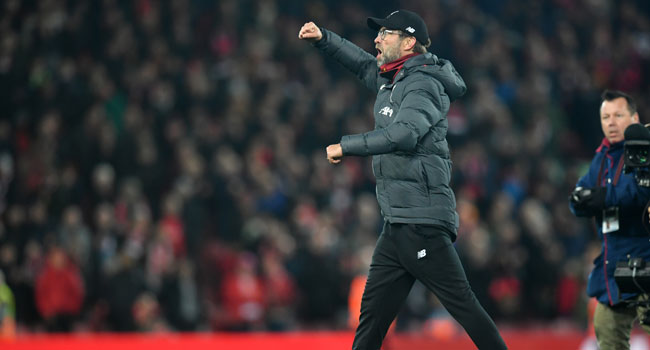 The European champions took a huge step towards a first top-flight title in 30 years by opening an eight-point lead at the top of the table, with Leicester City in second place.

Bernardo Silva pulled a late goal back but a third defeat in eight league games leaves City down in fourth, nine points behind Liverpool, and with a mountain to climb if they are to claim a third straight league title.

“They (City) were good,” Klopp told the BBC. “Oh they were good and we had to defend with all we had but we scored incredible goals.

“It was so tough to play, the intensity of the game was so clear. It was all worth it, really great.”

City boss Pep Guardiola said his side had shown why they were Premier League champions.

“What happened today we showed why are champion,” Guardiola told Sky Sports.

“I am so proud of my team, more than ever. We can be proud of how we played against the strongest team in Europe.”

“We played like back-to-back champions,” he added. “We cannot deny how good Liverpool are but the way we played, the personality, it was good.”