The governor visited the estate on Tuesday and invited all parties involved for a meeting in his office tomorrow, Wednesday.

Earlier in the day, Magodo residents had staged a protest over the presence of policemen in the estate.

Court bailiffs had also sealed some properties in the estate in the enforcement of a Supreme Court judgement.

The residents during the protest converged in front of the estate and displayed various placards lamenting over the situation and seeking the Lagos State government’s intervention.

Chairman of the Estate, Bajo Osinubi lamented that despite earlier intervention by the governor armed policemen have remained adding that residents had been living in fear as the policemen move around with their weapons.

Earlier in December, some police officers said to have been accompanied by hoodlums arrived at the estate with bulldozers.

The hoodlums marked some houses in the estate with an inscription which reads ‘ID/795/88 possession taken today 21/12/2021 by court order’ in what appeared to be a move to demolish the marked houses.

In a move against this, members of the Magodo Residents’ Association (MRA) locked up the gates leading to the exit and entry points of the estate in a bid to resist what they described as “forceful takeover”.

Following the intervention of the Lagos government, the police withdrew and normalcy returned to the estate the next day.

The Lagos State government condemned the attempt to demolish structures in the estate and promised to investigate.

Attorney-General of Lagos, Moyosore Onigbanjo said upon investigation those any person found culpable will be prosecuted.

He said the government was concerned that the landowners, under the Shangisha Landlord Association led by one Chief Adebayo Adeyiga, misled the Nigeria Police in an attempt to execute a judgment of the Supreme Court, notwithstanding the pending appeal against the issuance of a warrant of possession by the then Chief Judge of Lagos State on March 16, 2017.

He maintained that the judgment creditors had no claim for possession, and none was granted as no survey plan was tendered before the court.

Find below the full speech of the Attorney-General of Lagos, Moyosore Onigbanjo dated December 23, commenting on the land dispute… 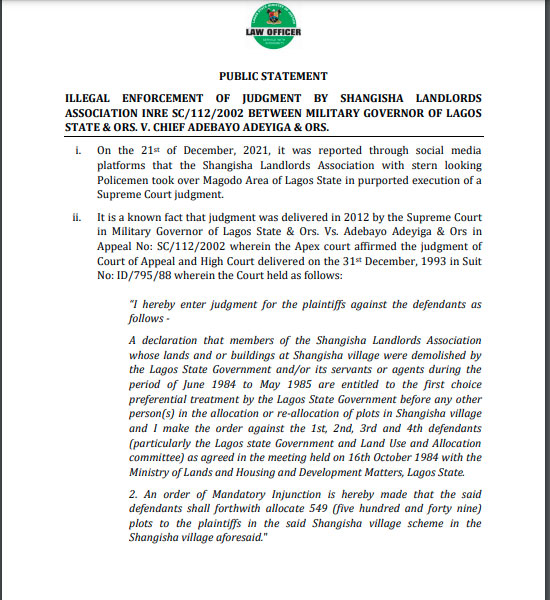 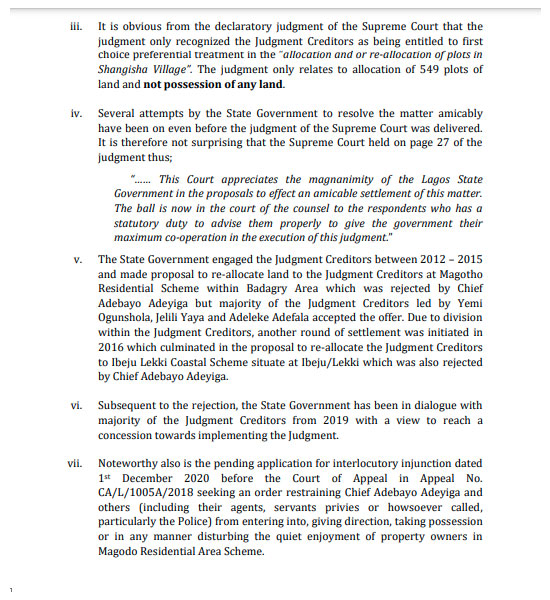 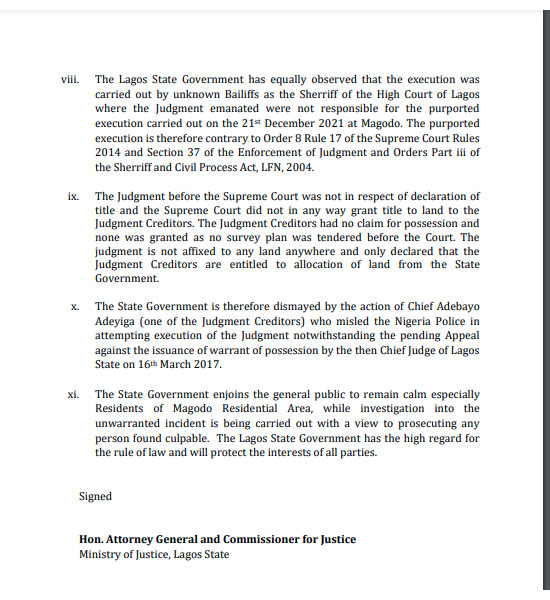