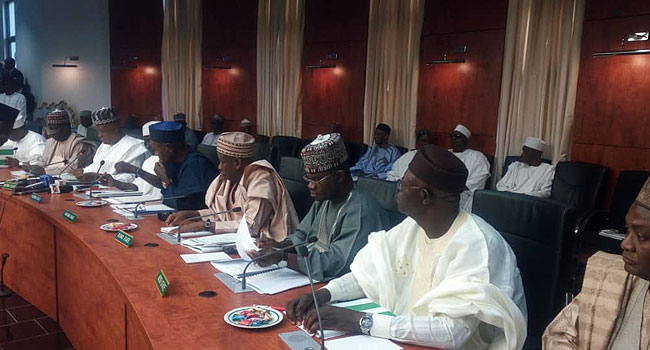 Governors of the 19 northern states have agreed to meet with President Muhammadu Buhari over the security challenges in the region.

The chairman of the forum and Borno State Governor, Kashim Shettima, disclosed this on Friday when the governors met in Kaduna state.

At the meeting which is the first this year, the governors agreed to set up a joint financial institution that will galvanize rapid socio-economic development of the region and enable it attain some degree of financial independence.

Governor Shettima in his address, said the northern governors will soon meet with President Muhammadu Buhari in order to exchange ideas on how best to tackle the various security challenges that are ravaging the region.

The northern region has faced tremendous security and other socio-economic challenges in the past years which include Boko Haram insurgency in the northeast, incessant kidnapping and rural armed banditry in the north west, herders/farmers clashes and communal clashes in the north central as well as high poverty and illiteracy level.

In what appears to be his valedictory speech , the chairman of the northern governors forum, Kashim Shettima reeled out the achievements of the forum since 2015.

He said the forum has been able to review the criminal justice system of the north that will ensure that those that get involved in crimes are adequately prosecuted, as well as initiating programmes that will impact on the economic and social well-being of the region that has been ravaged by poverty, under development and conflict over the years.

The meeting of the northern governors which later went into closed door, is expected to receive briefing on the security situation across states as well as submissions from officials of the northern Nigerian development company on the successes made in the areas of oil exploration in the lake chad basin , as well as reviving the collapsed Kaduna textile factory owned by the 19 northern states.

Meantime, a group known as Da Kawar Bara movement took their protest to the venue of the northern governors meeting to draw their attention to the menace of almajiri and street begging that have become rampant in the region.

The aim of the protest according to the leader of the group, was a call on the governors to take decisive actions against street begging especially the almajiri syndrome which involves mostly vulnerable children between the ages of four to ten.

The group wants the governors to enact implementable laws that will criminalize street begging.

However, the protesters were barred by the police from gaining access into the kaduna state government house where the meeting is taking place.