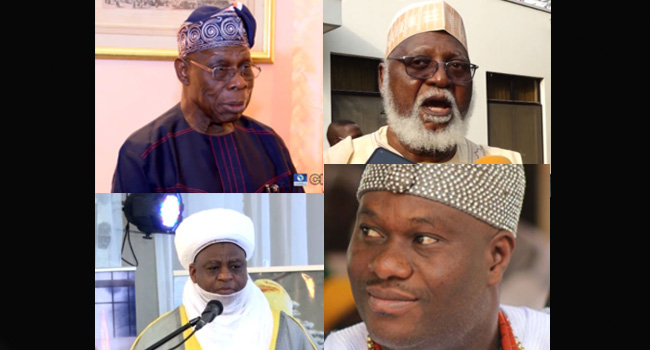 Former President Olusegun Obasanjo on Thursday met with various leaders including the Ooni of Ife, Oba Adeyeye Enitan Ogunwusi, the Sultan of Sokoto, his eminence Sa’ad Abubakar, and former Head of State, General Abdulsalami Abubakar, as part of efforts to address the myriad of challenges bedevilling the country.

The closed-door meeting which lasted for over nine hours took place at the Kano Conference Hall of the Transcorp Hilton Hotel, Abuja.

According to Obasanjo in a letter of invitation earlier extended to the Nigerian Labour Congress, the meeting which was in collaboration with the Interfaith Initiative for Peace, National Peace Committee and Socio-Cultural Consultative Committee all under Committee for Goodness of Nigeria, was an exploratory one bordering on pressing issues of national unity, security, peace, integration, economic revitalisation and development, women and youth welfare and general progress of the country.

However, at the end of the meeting, former President Obasanjo could not be sighted for comments, while former Head of State, General Abdulsalami declined to speak to journalists.

Meanwhile, the former Minister of Agriculture, Audu Ogbe and Cardinal John Onaiyekan who were also present, simply told journalists that the meeting was for the progress of the country.

Ogbe said a communique on the outcome of the meeting will be issued soon.