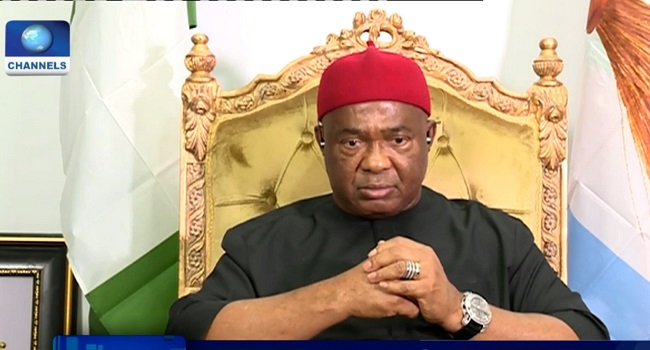 A war-of-words has ensued in Imo State regarding the security situation which has continued to be a thing of great concern for the Imo people and Nigeria as a whole.

Reacting to what it termed a continually degenerating situation, the People’s Democratic Party (PDP) on Thursday asked Governor Hope Uzodinma to resign.

The opposition party urged the governor to throw in the towel, arguing that he (Uzodinma) has failed to secure the lives and property of the Imo people.

At a conference in Owerri, the Chairman of the PDP in the state, Charles Ugwu, said the call has become necessary because of an evident lack of the capacity of the ruling party to guarantee the safety and security of lives and property in Imo.

According to Ugwu, emerging developments suggest that the governor has no answer to the spate of killings in the state.

The PDP urged the Federal Government to set up a high-powered panel to investigate the actual cause behind the gruesome murder of former presidential aide, Ahmed Gulak, which occurred in the state on Sunday morning.

Meanwhile, in a swift reaction, the Imo State Government through the commissioner of information Declan Emelumba said the statement credited to the PDP over the present state of insecurity in Imo is a clear case of self-indictment of the party as the real perpetrators of the chaos.

Emelumba called on security agencies not to wait for any further evidence in arresting and prosecuting the leadership of the People’s Democratic Party in the state for fueling unrest.

He asserted that the PDP in several fora has made it clear that they will make the state ungovernable for Governor Uzodinma, adding that the recent happenings in the state are a clear manifestation of PDP’s plans which was escalated by the gruesome murder of Mr Gulak.