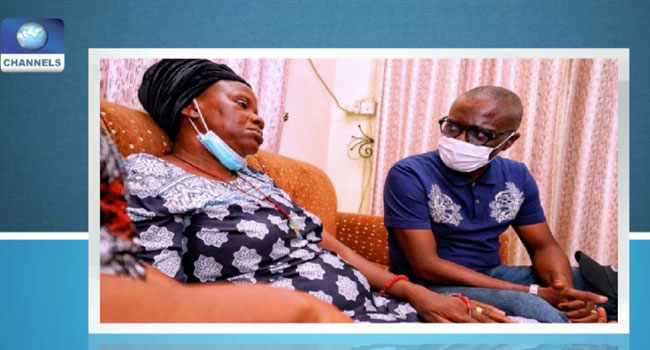 The Lagos State Governor, Mr. Babajide Sanwo-Olu yesterday visited the widow of Mr. Okechukwu Iloamuazor, the driver hit by a stray bullet during last Monday’s EndSARS demonstration by youths in the Surulere area of the metropolis.

Governor Sanwo-Olu commiserated with the family over the incident, which he described as unfortunate. He said the late Iloamuazor should not have died under the circumstance, but assured the family members that the perpetrators would be brought to book.

He explained that already, all the four policemen who opened fire on the protesters in the Surulere axis of the state had been identified by the government and the police authorities and they are currently undergoing an orderly room trial at the Lagos state police command.

Governor Sanwo-Olu also said the state government would take the officers’ punishment beyond the established disciplinary guidelines of the police.

He reiterated that his administration remained on the side of those calling for a change in policing methods adding that all those maimed or killed in Lagos in the course of the demonstration would be duly compensated even as the state government would honour their sacrifices by pushing for reforms that would bring about a policing system that will uphold rights of the citizens.