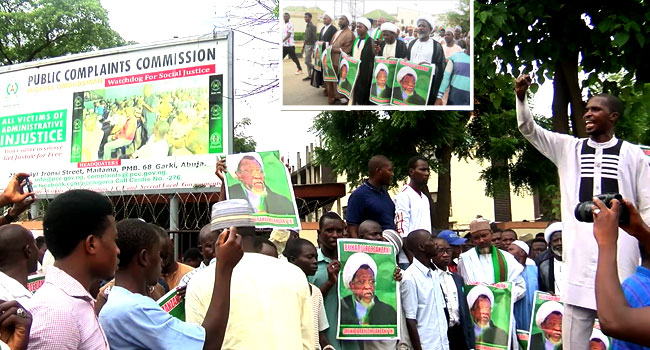 Members of the Islamic Movement in Nigeria (IMN) have returned to the streets of Abuja, to demand the release of their leader, Sheikh Ibraheem El-Zakzaky.

During a protest, spokesperson for the Academic Forum of the group Abdullahi Musa noted that the Shiites were more resolved than ever to continue the demonstration until their leader was granted freedom.

“This protest is a peaceful protest and it has been peaceful for long, for almost four years,” he told Channels Television on Tuesday.

READ ALSO: ‘Elzakzaky Must Not Be Allowed To Die,’ Falana Warns FG

“It only went violent when the authorities caused the violence. They are the violators, they are the people that shoot teargas.

This time, the Shiites took the protest to the offices of the National Human Rights Commission (NHRC) and the Public Complaint Commission, both of which share the same fence in the nation’s capital.

Mr Musa insisted that no amount of intimidation would deter them from carrying out the protest, following a demonstration at the National Assembly which turned violent.

He said, “We are always coming out to call for the freedom of our leader and we want him freed. There is no amount of killing that will stop up from protesting in Abuja.

“Allow him (ElZakzaky) go; he has committed no offence, he has every right to practice his religion the way he understands it.”

While the protest was ongoing in Abuja, a Senior Advocate of Nigeria (SAN) and human rights activist, Mr Femi Falana, cautioned the Federal Government against the continued detention of El-Zakzaky.

In a statement, he warned that the nation may be heading into another insurgency war, should the Shiites’ leader die in detention.

According to Falana, Nigeria cannot afford another insurgency war, especially at a time when it was battling banditry and other forms of crimes.