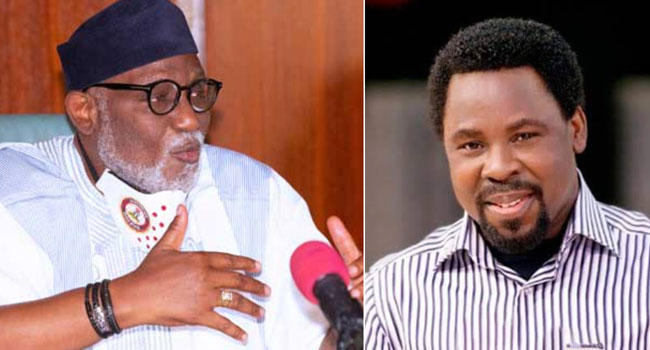 Ondo State Governor Oluwarotimi Akeredolu says he has received the news of the death of Pastor Temitope Balogun Joshua with a heavy heart.

Governor Akeredolu in a statement on Sunday said the renowned man of God was a blessing to humanity and a great Ambassador of the Sunshine State whose Ministry was noted for charity.

He further described the late prophet as one who demonstrated timelessly, an alluring service to humanity.

“Undoubtedly, Pastor Joshua’s demise came as a rude shock. The pains are not mere emotional flashes; they are indeed piercing. The Ondo-born Pastor and Televangelist was a philanthropist whose exit will be sorely missed by many.

“Pastor Joshua was committed to giving and was more often, inexorably imbued with calmness while lifting the downtrodden. As a televangelist, he did not just win souls for Christ, he was passionate about changing lives.

“He demonstrated timelessly, an alluring service to humanity and compassion by assisting not only his home local government, Akoko North West. Other adjoining local governments in Akoko land benefitted from his large heart of benevolence.

“Of significant note too, Pastor Joshua never hesitated to assist in whatever manner the Ondo State Government desired such. To us in Ondo State, we consider this a personal loss. He was a pride to the Sunshine State

“Not only Africa is hit hard; this is a great global knock as his Pastor TB Joshua’s ministry attracted immeasurable foreign followership. Christendom has lost a giant.

“The reality of the finality of death truly hurts the heart. But for TB Joshua, he had played his own part of the endless life orchestra; he has departed. We must take solace in his good deeds while here. He is now Heaven’s gain. The people have lost a committed giver. We shall continue to remember his contributions to the development of our State,” the statement partly reads.

While commiserating with the immediate family, the entire membership of the Synagogue Church of All Nations, Governor Akeredolu expressed his heartfelt condolences to the Zaki of Arigidi Akoko, Oba Yisa Olanipekun, and the entire community over the loss of a great son of the soil.

The Governor prayed God to grant the late ‘man of God’ an eternal rest in His bosom and comfort grieving family members, friends, and associates.

In a similar vein, Governor Samuel Ortom has expressed deep sympathy with the Synagogue Church Of All Nations (SCOAN) and the entire Christian community in Nigeria over the death of Prophet T.B Joshua.

The Governor in a brief communique on Sunday described the sudden demise of the renowned preacher as shocking and unfortunate.

He said the evangelist will be remembered not only for spreading the gospel of Christ but also for his humanitarian works through which he positively touched millions of lives.

Governor Ortom prayed that God grants the soul of Prophet T.B Joshua eternal rest and his family and members of his church the strength to bear the loss.