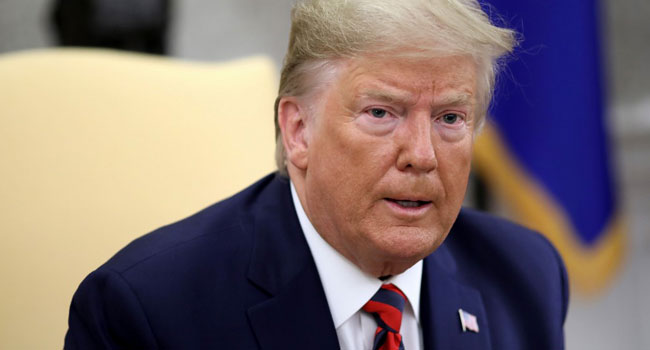 Donald Trump angrily denied wrongdoing Friday in a phone call with a mystery foreign leader that prompted an intelligence whistleblower to sound the alarm, as reports say the complaint centers on a conversation with Ukraine’s leader.

The allegations have triggered a showdown between Congress, whose Democratic leaders are demanding to see the contents of the complaint, and the Trump administration which has barred lawmakers from reviewing it.

According to a report by The Washington Post, which cited two unnamed former US officials, the complaint stemmed from Trump’s communications with Ukraine, and a “promise” allegedly made by the president.

“It’s a partisan whistleblower,” Trump fumed to reporters, while acknowledging in the same breath that he does not know the identity of the person who filed the complaint.

Trump spent much of Friday morning addressing the growing firestorm and denying wrongdoing, earlier tweeting that he had a “pitch perfect” conversation, without detailing whom he had spoken to or what was said.

“I can say it was a totally appropriate conversation,” Trump said.

The allegations could refer to a call known to have been made in July between Trump and Ukraine’s President Volodymyr Zelensky, a former professional comedian who was elected in May.

Trump’s Democratic opponents have already been probing that call as part of an investigation into allegations that Trump and his personal lawyer Rudy Giuliani tried to pressure the new Ukrainian administration.

Trump allegedly sought to encourage the Ukrainians to pursue corruption charges against the son of his main Democratic rival in the 2020 presidential election, Joe Biden.

Amid the swirling allegations, Giuliani gave conflicting answers late Thursday about whether the administration had urged Ukraine to investigate Biden, at one point telling CNN “of course I did.”

Moments earlier he denied that he asked Ukraine about Biden.

But when asked whether Trump spoke with Ukraine’s president about Biden, Giuliani said “I don’t know if he did, and I wouldn’t care if he did.”

Trump, Giuliani added, “had every right to say to the Ukrainian president: ‘We have two outstanding allegations of massive corruption and you should investigate.'”

Adding yet another layer to the controversy, congressional policymakers were reported to be concerned that the Trump administration had been holding back military aid to Ukraine at the time. The aid was finally released last week.

Biden is leading the crowded field of Democrats seeking the party’s 2020 presidential nomination, and most head-to-head polls show the former vice president leading against Trump.