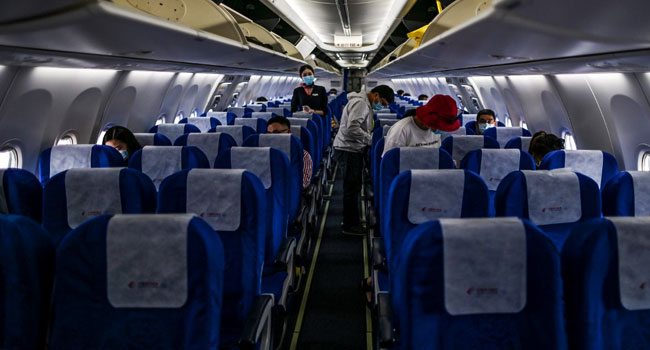 Washington on Wednesday ordered the suspension of all flights by Chinese airlines into and out of the United States after Beijing failed to allow American carriers to resume services to China.

The move adds to a growing friction between the world’s two largest economies amid the coronavirus crisis and in the wake of a two-year trade war that has not been fully resolved.

The US action takes effect June 16 but could be implemented sooner if President Donald Trump orders it, the Department of Transportation (DOT) said.

The suspension applies to seven Chinese civilian carriers, although only four currently are running services to US cities, including Air China and China Eastern Airlines, the Department of Transportation (DOT) said.

“US carriers have asked to resume passenger service, beginning June 1st. The Chinese government’s failure to approve their requests is a violation of our Air Transport Agreement,” the department said in a statement.

US air carriers had sharply reduced or suspended service to China amid the COVID-19 pandemic.

United Airlines and Delta Air Lines submitted applications at the beginning of May to resume flights but have been unable to receive authorization from Civil Aviation Authority of China (CAAC), the DOT said.

The latest spat between Washington and Beijing centers partially on the CAAC deciding to determine the flight limit for foreign airlines based on their activity as of March 12.

But US carriers had suspended all flights by that date due to the pandemic — meaning their cap was calculated to be zero — while Chinese-flagged flights continued.

The “arbitrary ‘baseline’ date… effectively precludes US carriers from reinstating scheduled passenger flights to and from China,” the US order says.

The department also said there are indications Chinese airlines are using charter flights to get around the limit of one flight a week to increase their advantage over US carriers.

“Our overriding goal is not the perpetuation of this situation, but rather an improved environment wherein the carriers of both parties will be able to exercise fully their bilateral rights,” the order said.

In early January 2020, before the pandemic struck, US and Chinese carriers operated approximately 325 weekly flights between the two countries.

US carriers praised the administration’s move

“We support and appreciate the US government’s actions to enforce our rights and ensure fairness,” Delta spokesperson Lisa Hanna said.

And Katherine Estep of industry trade group Airlines for America said the order should “ensure fair and equal opportunity for passenger airlines with respect to service to and from China.”

The fight over air travel comes after the US imposed restrictions on Chinese telecom giant Huawei and ordered a probe into the actions of Chinese companies listed on American financial markets.

Trump also has blamed China for the US coronavirus outbreak and blasted the country in a fiery speech last week over a new security law in Hong Kong.

China mocked the US stance on Hong Kong in light of civil rights protests across the US following the police killing in Minneapolis of George Floyd, an unarmed African-American man.

“Racism against ethnic minorities in the US is a chronic disease of American society,” Chinese foreign ministry spokesman Zhao Lijian said earlier this week.

Meanwhile, American Airlines, which is not planning to resume service to mainland China until late October, saw its debt downgraded Wednesday by S&P Global Ratings due to the company’s precarious situation.

Airlines have been among the hardest hit by the global pandemic as air transport has been virtually shut down, forcing many to announce massive layoffs.

S&P lowered American’s debt grade a notch to “B-” saying the cost-savings measures it has taken “will be insufficient to offset the effects of sharply lower demand from the impact of the virus on the company’s credit metrics.”

American is a beneficiary of the government’s Payroll Support Program, under which it will receive $5.8 billion through July 2020, but S&P said the carrier still has a cash shortage.